The County Championship has a certain charm about it, as if from a bygone era, with a tradition and a history. The players wear white for a start, which serves as a reminder as to how the players were always meant to be dressed,  albeit slightly tarnished by having football style numbers on their backs.

Four day matches in all parts of the country, from test match venues and traditional county grounds to far flung outposts, as counties try to take the game to all their followers. There can be no better sight than a cricketing festival at a sun-kissed small club ground in the height of summer, brightly coloured flags fluttering above marquees, beer tents thronging and creaking grounds packed to the rafters with cricketing punters and enthusiastic children.

The County Championship has a unique following, largely that of an ageing population who grew up with this form of cricket, as well as the John Player League on a Sunday, and who can reminisce about all the legends who they have seen play over many many years and who once plyed their trade in this form of the game. They have all been there and done it, even arguably the greatest of them all, Sir Garfield Sobers, who spent six seasons at Nottinghamshire. At one time in the early 1980’s Somerset were blessed with not only Sir Ian Botham, but the legends that are Sir ‘The King’ Viv Richards and Joel Garner.  Box office indeed. Taunton was a fun place to be at that time but that surely would not be allowed to happen these days as player welfare considerations seem to largely prevent the highest profile players turning out for their counties, which is a huge shame in many ways.
County Championship cricket has always been a breeding ground for some, a finishing school for others, and arguably a passport to the international game. Yet for most, what might be termed ‘journeymen’ cricketers, it is their bread and butter, their daily grind on the cricketing treadmill. They put in the hard yards and they drive the long miles to earn a crust.
From a distance, it all appears very quaint and genteel, a pleasant day’s cricket including a healthy lunch and a cleansing ale or two at the close of play. Yet it is far from that. The last two weeks of this County Championship season were as gripping and tense as any sport could possibly be, the cut and thrust of top level sport with its swings and roundabouts, ebbs and flows, all played out over eight long days of tension and drama. And this was only for the second relegation spot. Last season the situation was equally dramatic, yet that was for the outcome of the Championship.
For the watching folk, this is nothing new. They have been all been there before, seen it, witnessed it, smelt it and tasted it. Yet they can’t miss it. It is Iike a drug or even a religion.

At Lords two weeks ago, Middlesex were playing Lancashire in an absolutely crucial match in the penultimate round of fixtures in what was to be the final days of cricket at Lords this summer. Critical for Middlesex that is, as their very future in the top flight depended on their final two fixtures and was very much in the balance. The huge significance of the match swelled the crowd from what is often unfairly referred to as ‘one man and his dog’ to what seemed like a couple of thousand hardy souls, albeit the marvellous old ground does look a little strange when so deserted. 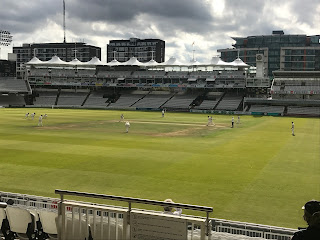 Why the finale of the County Championship has been shunted back to weekdays at the end of September, when most cricketing supporters are at work or back in education, is beyond many and does somewhat downgrade the significance of this competition. Not forgetting too the wet, the cold and the wearing pitches but that’s another story for another day. However, be that as it may, for the ECB somewhat understandably have a wider agenda aimed at maximising revenue driven by the white ball game, nothing was going to keep the retired traditionalists and other assorted cricketing enthusiasts away from Lords for these few days. A larger coat maybe, an extra jumper perhaps, hot coffee in the flask and job done. 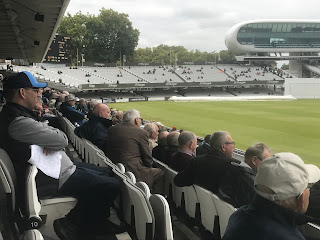 These older gentlemen are a fascinating bunch, all different, full of foibles and idiosyncrasies but with one thing in common, a love of the game of cricket. They all generally make their way to the same area of the ground as always, they simply just rock up and some fellow like-minded souls will be there. No pre-organised arrangements on modern day technological devices, like the youth of today, good lord no. It’s just like pitching up at their local on a Friday night for an ale, someone will always be there. Some even hop across London between Lords and The Oval on alternative days to get their daily fix, some even on the same day. Dedication indeed.
Their lives have gone full circle. From young boys, when they lived for sport, playing football and cricket at school and in the back yard until it became too dark, to now, when their working lives are over, and they can return to pursue their favourite interests once again, albeit as spectators. Some unsteady on leg, some with only one leg, but it is wonderful to see their continued enthusiasm for the game. For many it is their life.
Yet they have lost none of their knowledge or humour. They chat like schoolboys and nothing gets past them. There seems to be an unwritten competition as to who knows most yet what collectively they do not know about cricket, and indeed football, really isn’t worth knowing. For example, not many would have studied the weather forecast from Chesterfield that morning to assess what impact it might have on the promotion race in Division Two. Some even share a few wise cracks with the engaging lady steward to prove that they haven’t lost their touch.
There appeared to be very little one-upmanship. None of the  big “I am” as might possibly be expected from gentlemen of a certain age. Maybe that behaviour is reserved for some of the more self important MCC members but on the whole the cricketing crowd is characterised by a sense of loyalty, decency and fairness, with due consideration for their fellow man.
However, they all have their own routines and specialities. There was the gentleman with the faded club cap and traditional large hard backed scorebook,  noting every delivery meticulously with a sharpened, trusty old pencil. He was always the point of reference for all statistical analysis and regularly questioned by his fellow followers. There was the Irish chap who had half an eye on the cricket and half an eye on the Racing Post, occasionally leaping to life with a tip, yet for the most part quiet and studious. After all the cricket was particularly tense, as Middlesex stuttered and stumbled in trying to build a healthy second innings lead. Some tried to laugh off this tenseness with some wise quips but deep down they all knew the significance of the occasion. As hard as they tried they became completely engrossed in the match unfolding in front of their very eyes, punctuated by regular updates on events at Edgbaston and Chelmsford, where crucial relegation battles were also being pitched.
Yet there’s always the wag, the joker amongst the pack and arguably very much needed to ease the growing tension. Little gems regularly flowed, from when to use the phrase “Foxtrot Oscar” if coming into contact with any objectionable characters; to the fact that the Middlesex lower order resemble ‘bats out of hell’ and that the injured Toby Roland-Jones now needs a long rest, and that’s not only for when he is playing snooker. He joyfully referred to the Lancashire batsmen Liam Livingstone leaping around as if he had a ‘ferret down his trousers nibbling away at his acorns’ when facing a particularly hostile spell from the Middlesex paceman, Steven Finn. It was laugh a minute, as the tension grew.
Yet the humour was interspersed with some factual nuggets. Who would have thought that Phil Tufnell, a Middlesex man through and through, would end up living in Surrey, his county’s arch rivals, a fact confirmed by one of the knowledgeable stewards. Yet current Middlesex spinner Ollie Rayner, amusingly referred to as ‘the Oligarch’, lives within a stone’s throw of Lords and that his wife works in a local school. Useful facts indeed for the cricketing connoisseur.
Amidst all the tension, relief was also provided by the obligatory breaks and how they were needed. A chance to stretch aching limbs and calm weary souls. For the older gentlemen, a crusty old ham sandwich and a pork pie with relish, with perhaps a fading weather beaten apple was just the ticket. The staple diet and  devoured with as much gusto as could be summoned.

For the younger, slightly fitter and more able, a stroll round the ground, arguably one of the best walks in cricket, for the spectator at least. 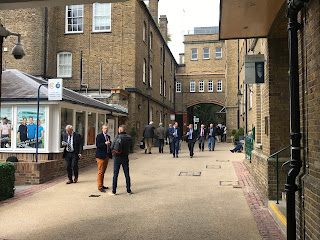 Guaranteed cricket celebrity spots if one is so inclined, even on days such as these when Lords only has a meagre crowd and is beginning to batten down its hatches for the winter. An impeccably suited David Gower chewing the fat with one of the groundsmen for starters, yet left to his own devices rather than being swamped by the ‘selfie’ generation. The Lords shop was reasonably well populated and doing a brisk trade as the punters took advantage of some end of season bargains, supplemented by a tea time appearance from the great Mike Brearley, signing his new book for his eager followers. One to sit nicely alongside his highly acclaimed ‘Art of Captaincy’ on the cricketing bookshelf. 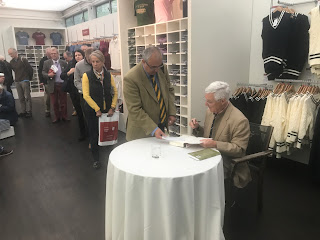 Yet this all provided no more than a brief interlude. Whenever the five minute bell tolled, all were back in their seats for the final denouements. Unlike a test match when the champagne tents and bars would be well populated all day, no-one would be hanging around the chilly bars behind the stands on days like this, the events on the field of play held far too much importance.
As a revitalised Steven Finn, for this match anyway, tore into the Lancashire batting, hope of a Middlesex victory, and potential survival, grew. The old boys’ furrows turned to more hopeful expressions and ultimately broad smiles when, just after 3pm on the third day, Middlesex captain Adam Voges took the match-winning catch to give Finn his eighth wicket of the innings, some performance that in the circumstances. All set up for Taunton the following week and the ultimate winner takes all or, more pertinently, loser goes down. 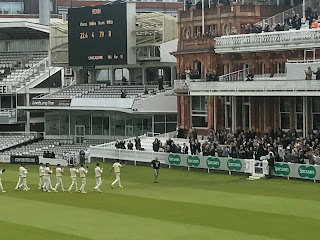 As for the ageing spectators, handshakes all round and best wishes. Another season over at Lords. One that could never really match the successes of the previous season for Middlesex, but that’s cricket, that’s life. Yet these spectators are a philosophical bunch and you can bet your bottom dollar that they will all be back next year, in the same seats, with the same chums and with the same enthusiasm. For the moment though, a final hurrah was uttered, “does anyone fancy the last session at The Oval, the weather looks set fair”.