Does Everybody Want To Rule The World ? For many rock and pop bands that is their ambition. To crack America, to go big, to achieve fame and adulation across the globe, play to sell out audiences in every city and earn a few pounds, dollars and euros along the way.

For Tears For Fears, from humble beginnings in Bath, they have well and truly achieved notoriety across all corners of the world, now living in America and having lived the dream.

That said, theirs is often a Secret World, yet they are still Sowing the Seeds of Love wherever they go and wherever they perform.

Last friday night at Newmarket Races they returned to the UK for their first gig in 11 years. It was a glorious homecoming in a beautiful setting, the crowd was packed in the stands and the vast grassed area in front of the stage. The evening was fine, so no need for any Pale Shelter. 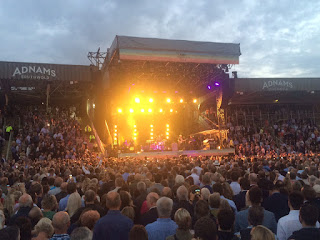 The expectant crowd wondered if Curt and Roland, the TFF frontmen  could Break It Down Again and they absolutely nailed it, the crowd in the palm of their hands from the opening bars of the instantly recognisable EBWTRTW, which was made even more famous having been used to promote everybody running the world  in the 1980’s.

Whilst the band have a slightly chequered history, they split in the 90’s, the events of 9/11 brought them together again and their comeback album in 2005, Everybody Loves A Happy Ending, was just that. The same could be said of Friday night, it really was a triumphant return.

To the band’s devotees, it was their debut album, titled ‘The Hurting’, released in 1983, which hooked them. An album characterised by the classic 80’s synthesiser sounds remains an all time classic, yet now embellished ‘live’ by guitar riffs and it sounded magical. Change reminded many of the audience of what they had perhaps forgotten and the lyrics came flooding back as many wondered what had happened to the friends that they once knew.

It seemed that all around were familiar faces as Curt sang Mad World, the original and best up tempo version. No cover comes close.

As the stage darkened, it was Roland’s turn, his voice echoing in the night as he sang the opening lines of Memories Fade and with it memories of the opening song of The Hurting Tour came flooding back to those who had witnessed it. As his voice lingered the stage lit up. It was so atmospheric and, to many, it was the Closest Thing To Heaven. 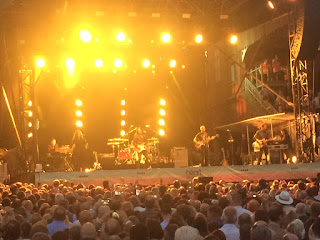 This was no Creep and if those watching could pass on any Advice For The Young At Heart, it would be to listen to Badman’s Song, a jazz-inspired layered and contoured rock masterpiece. It sent many of their adoring fans Head Over Heels. It’s funny how time flies yet the music still sounds as good as it always did, if not better.

The crowd demanded more and were not disappointed. Alas no Oleta Adams this time, but Woman In Chains was performed with passion and feeling, the men of stone succumbing to the beautiful and powerful female voice.

The intoxicated crowd had been treated to a masterful performance and as the concert drew to a close, all they really wanted to do was shout, shout and let it all out.  As had gone before, Tears For Fears didn’t let them down and they all lived to tell the tale.

Posted in Music and tagged Gigs, Newmarket, Tears for Fears