At Wembley last night, it was a toss up as to what brought the loudest cheer. Until the 92nd minute it was either the paper aeroplane that was launched from the upper tier and almost singed the head of the England manager Gareth Southgate, standing bemused in his technical area, as it swooped onto the playing surface or the weaving run of a pitch invader as he outfoxed the sole steward in pursuit,  before reinforcements arrived to cart him away.

Neither were remotely edifying but such was the dire nature of England’s performance, and indeed that of the game as a whole, that the crowd needed something to arouse them from their slumber.

Indeed, for most of the second half, there was more interest in the art of paper aeroplane throwing from the stands, than events on the field of play. The pitch and surrounding area was littered with the damn things. Wembley has found a new sport, and it seemed to be taking-off in a big way. 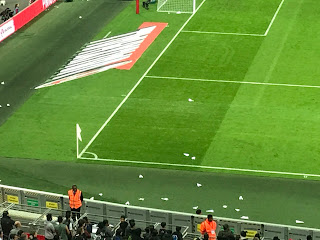 The whole occasion rather resembled Theresa May’s speech at the Conservative Party conference, a stuttering performance regrettably interrupted by an unwanted interloper, who should not have been allowed anywhere near the action. As with the unfortunate Prime Minister, such was the state of shock that suddenly gripped all the stewards at Wembley, it seemed like an age before anyone did anything about chasing and removing the intruder. The country’s security clearly needs reviewing in more than one respect.

Those cheers were finally surpassed by the ones that greeted Harry Kane’s last gasp sliding winner, as he swooped to guide Kyle Walker’s low cross into the goal, via the Slovenian goalkeeper’s legs and then what seemed like an indeterminable wait as the ball slowly trickled over the line. Cheers of relief if nothing else.

Shame on all those who had left their seats to miss this final denouement. Many in the supposed 61,000 crowd had long since made their way to the exits, sadly an all too familiar state of affairs in this day and age at all levels of football. Why pay such exorbitant sums to come to Wembley and then depart before the end and miss the best bit ? Crazy. Pity the poor boy on his first visit to Wembley – he devoured the pre-match burger, got the t-shirt or more likely the replica kit, took the obligatory selfie but his father inexplicably decided it was time to leave five minutes before the end of the match, presumably to miss the traffic, and so they missed the goal. Hardly a satisfactory conclusion to a night out and guaranteed ribbing on the playground today. May that be a lesson to you young man for when you get older.

Yet more excitement was still to come. As if the crowd needed more after such a grand finale, they could hardly contain themselves when, upon the blowing of the final whistle, and following the rather euphoric pronouncement that England had indeed now qualified for the World Cup Finals in Russia next year, a further announcement was made regarding forthcoming friendlies. England would be entertaining both Germany and Brazil over the course of five days in mid November. Now this is a mouth watering prospect, the thought of some Brazilian flair gracing the Wembley turf and samba in the stands. Perhaps the cheers that greeted this news were more of an ironic nature for if England perform as badly against these giants of world football as they had just played against the relative minnows of Slovenia, they will not stand a prayer. It could get messy and both matches could be huge mismatches. However, fortunately for England, friendly matches are just that, and no doubt England will perform creditably whilst the big boys will save their best for when it really matters and trophies are on the line.

Southgate has much thinking to do. Whilst Slovenia provided resilience in defence and an occasional dangerous forward threat,  they really are no more than an average Championship side and any self-respecting international team worth their sort should brush them aside at a canter. That England had to wait until the 92nd minute to eventually score their only goal and win the game, rather shows where England stand in the international footballing hierarchy.

Their performance was simply abysmal, lacking in co-ordination and any semblance of teamwork. They resembled a collection of individuals who had never met until the teams lined up and 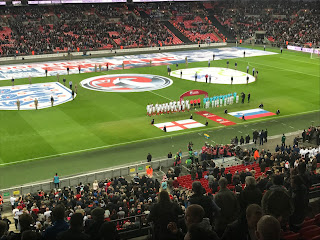 proceeded to huff and puff their way through the whole match with seemingly no discernible tactics or strategy.

Southgate will argue that he was missing Rose, Alli and Vardy, and whilst Alli is arguably the most natural attacking talent that England possess, this holds little water and really is no excuse. It is Slovenia after all, hardly a footballing superpower. The majority of the English players on show are simply not good enough for this stage. Indeed many, such as Alex Oxlade-Chamberlain, Raheem Sterling and Jesse Lingard are unable to command a regular starting place in their club teams so, realistically, what can be expected of them on the international stage.

Even the better players, those that have started the season well for their respective clubs were distinctly off colour. Kane tried to inject some pace and had a fair few longer range efforts, but he was clearly missing the usual promptings and assists that he receives from Alli and Eriksen at Tottenham. Marcus Rashford started brightly but, after losing his cool on more than one occasion, faded badly and the longer the match went on, the more his confidence and touch deserted him. Another one who missed the quality and skill of his club colleagues.

Sterling buzzed around but to no good effect and remains an enigma at this level. The English attack bore little resemblance to quality of the players that he plys his trade with at Manchester City, where the likes of De Bruyne, Silva, Aguero, Jesus and Sane make his day job distinctly easier than his experiences of international football.

Indeed it could be argued that, with the possible exception of Joe Hart at West Ham and Ryan  Bertrand at Southampton, all the club teams that the rest of the England starting eleven represent, would comfortably beat this England team. A sorry thought and a sad state of affairs but that is what Southgate is faced with.

For all that, England should still be able to brush aside opponents such as Slovenia relatively comfortably but to do so, they needed to attack with more intent, to move the ball faster, to work their opponents and stretch them so as to create goal scoring opportunities.

Alas England were bereft of attacking ideas and indeed even struggled with basic skill levels. Jordan Henderson tried to open things up by switching play and delivering long diagonal balls behind the Slovenian full backs, good in theory but his execution was sadly lacking. It really is not his game. Quickly abandoning this tactic he returned to his staple diet of short square passes, along with his fellow central midfielder Eric Dier and fairly soon his colleagues had caught the same bug. It was depressing. Bertrand gave a passable impression of a rabbit caught in the proverbial headlights and showed no attacking ambition at all, a culture of fear suddenly engulfing him and all the English players. Yet this was only Slovenia. The fact that Joe Hart was named man of the match, admittedly before the last gasp winner, also tells its own story when all Hart did throughout the match was to pass the ball to his centre halves and to make two half decent saves late on, neither of which will remotely be contenders for saves of the month, if indeed the week. It really was that bad.

Yet at last, all-action boys-own hero Captain Harry Kane came to the rescue. The new English talisman, doing what he does best, leading from the front and getting into those dangerous areas, those areas where it can hurt but where the brave can be rewarded.

Kane was indeed rewarded, so was his manager and fellow team members and now they can book their flights to Russia. However, unless they show a marked improvement on the evenings showing, then they will be on the first flight back home.