Skip to content
The lights are bright, the music is loud, the venue is compact and atmospheric, colour abounds, the action is fast paced and exhilirating, there are thrills and spills, it is the new show in town, welcome to handball!
The Copper Box is the home to this colourful spectacle and if ever there is a case of ‘it says it on the tin’, then this is it. 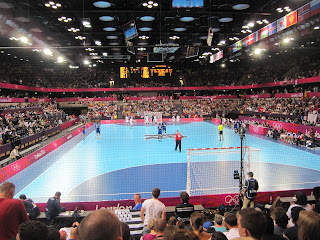 The matches are exciting and competitive with plenty of goals, but they are not ‘give-aways’, they all have to be earned with no little skill. It is a tough game, it can be bruising and is extremely physical. The players command respect and only the fittest survive.
Yet there is razzmatazz and humour to be had. Yellow cards are handed out like confetti and the offending players are greeted by an unforgiving rendition of ‘Sit Down’ by James as they trudge their way towards the sin bin.  Two yellows warrant a few bars from Michael Jackson’s ‘Bad’, yet two minutes later they are no longer bad as they are allowed back on court again! Indiscretions appear to be quickly forgiven in the world of handball, which is probably just as well given that there are only seven players in each team.
In today’s morning session, the Spanish armada overcame the plucky South Koreans in the opening match and then France, the current Olympic champions, had to dig deep and show resolve, as well as classic gallic flair to see off the muscular Tunisians. Indeed for the Tunisians it was more than just muscle, their talismanic hit man Tej gave the impression that he probably spent much of his time away from the pitch in the kebab shop and he was a dangerous customer, no quarter asked or given. It was only in the latter stages of the match that the french flags were unfurled and chants of “allez les bleus” rang round the arena.
It was fine entertainment. The event was superbly managed and the experience was one to savour. Handball is here to stay. 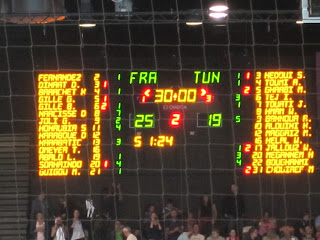 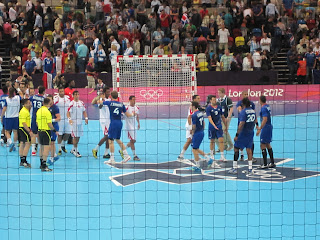