Not a moment had passed after the final whistle at the DW Stadium than the QPR twitter feed sprung into life with gusto. Supporters first, then official club retweets, followed by the owner and then the players themselves. The message was the same. Delight at the hard fought win at Wigan courtesy of the captain’s strike, appreciation of the loyal fans who had made the trip and how good it felt to be going into the two week international break on the back of a victory.

The feel good factor from one and all was palpable. For two full weeks, QPR will be positioned in 5th place and with it there will be renewed hope and optimism for the season ahead, especially after the Preston debacle. There is also a home tie with Sunderland to look forward to in the 3rd round of the EFL Cup, a place rarely frequented by the R’s in recent seasons. Heady heights indeed, springs in steps all around and  positivity flowing from QPR related posts and faces wherever you care to look. Potential new signings would also have viewed the league table in a positive light and perhaps led to the two deadline day acquisitions.
To the supporter and observer, there is a sense that the training ground would have been a happy place to be in the following two weeks and the mindset would have been good too.
Yet let’s consider the alternative for a moment. Defeat at Wigan would have left the R’s languishing in 16th place, for two full weeks, with recriminations, discord and twitter tantrums. Heads would be down, brows would be furrowed as accusations would fly with proverbial bubbles bursting everywhere. Potential new signings would have viewed the league table with apprehension and caution.
The football world is a fickle one, as the above demonstrates, as is the mind. One positive result like that and everything feels good again. Time to reflect on what has actually been a good start to the season. As with every victory, players and supporters alike would have been reading match reports and all that social media has to offer to relive this latest victory, to get a different take on events from a different source, all finished off with another look at the table which will continue to show QPR in 5th place. The more it is viewed the better it feels.

Blackburn at home is just over the horizon, surely a very winnable match in view of their current predicament and by adding three more points to the tally then……well, it could become very interesting. As the club has often espoused in the past, the supporters should ‘dare to dream’ and dream they will, at any given opportunity. As the mind wanders those potential holiday plans for next May might need to be put on hold, yet a defeat to Blackburn and Thomas Cook could be receiving a call.

The mind plays games with the supporters and the players too.
Let’s consider the mindset of the players. Pre-season focussed on fitness and bonding with a seemingly positive trip to Holland, which was followed by some lacklustre and uninspiring friendlies in the new purple kit against some lower league sides. The playing staff saw a clearing out of some of the old guard and some of the overpaid prima donnas with an influx of younger hungrier talent, who were clearly going to be keen to make a mark on their new employer. Reasonable competition for places so no one could afford to rest on their laurels.
JFH is a positive character and despite the relatively low key nature of the friendly results he was not panicking and the culmination of all this work was the Watford match, which might be considered a watershed moment. A return to Loftus Road, wearing the new hoops for the first time, a sunny day and playing against undercooked opposition. The Hornets could not cope with the fitter, more battle hardened Rangers who tore into them from the off, epitomised by the BFG, Rangers’ new talisman. Even young Conor got on the scoresheet. 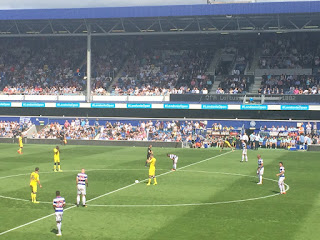 The effect of this victory was massive. All the hard work of pre-season seemed to be paying off. Players’ and supporters’ minds were buoyed, confidence was cursing through veins as Leeds arrived on the opening day and it was no surprise that they were emphatically despatched. 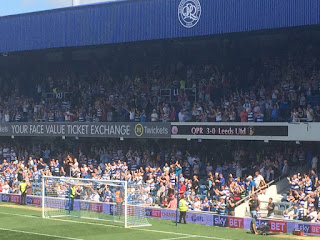 This positive mindset continued to the Cardiff match with a performance combining solidity, resilience and self belief, so that the relatively comfortable victory was no real surprise.
Yet then the fall. Players can believe their own publicity and whilst the defeat at Barnsley could have been considered a little unlucky or careless, whichever way you look at it, the defeat at home to Preston was lacklustre in the extreme.

It was hard not to imagine that the players simply expected to turn up and they would win. After all, Preston had played three lost three and were languishing at the bottom. The mind set was all wrong. JFH and his coaching team surely warned them against complacency but the mind does

strange things. The team looked lethargic, disjointed, lacking energy and purpose and however hard they tried they could not raise themselves from the slumber. Even a few harsh half time words could not arrest the decline, the mind set simply could not be changed. Unlike a champion team, Rangers do not really have enough talent at their disposal to win despite playing really badly.

Fortunately there was a swift return to Cup action where the Sandro inspired supposed lesser players managed a victory over Rochdale whilst most of the first team were able to spend a week away licking their wounds and refocussing. This culminated in a much stronger approach in both mind and body to the challenges of Wigan away and the resultant hard fought determined performance led to winning the all important three points. It certainly wasn’t pretty but it was a job well done and proved that the mind set has to be spot on to achieve success.

Most teams in the Championship will experience a similar fluctuation of fortunes as the season unfolds. As it is often said, on any given day most teams in this hugely competitive league can beat each other as, for the most part, the standard of football is quite similar, bar the odd exception. It is all about hard work, effort, energy and commitment and whilst skill levels can always make a difference, it is often not the critical factor. What can turn matches is the desire, hunger and attitude of the players in a team, all factors than come from within.

All of which brings us full circle to the next match, Blackburn at home. The feel good factor will remain from the Wigan victory and the generally positive start to the season, but JFH and his staff will have to drum into their players that there cannot be a repeat of the Preston performance. Blackburn are bottom of the league with only one point from five games, including four defeats and, on the face of it, come to Loftus Road without a proverbial prayer. However, they will also have had two weeks preparation time and will no doubt be fully committed as they will be fighting for their lives.
Rangers have to be fully focussed and up for the challenge. They clearly have the ability to win but doing so is another matter. The attitude must be ‘spot on’ from the first kick and the players’ heads need to be in the ‘right’ place. As ever, like the higher echelons of most sports, whilst the game is played on the pitch, it really is often won in the mind. The QPR players need to be in the right ‘frame’ and if so, the results will take care of themselves, the table will look desirable and the tweets will be sweet.
Posted in Sports and tagged football, QPR