Get up, get up, get out of your lazy bed. The 80’s children sure did and made their way down to the meadows on the banks of the river at Henley to see their heroes and hearthrobs of yesteryear back on stage, reliving their youth, just a little older, a little larger and showing a few shades of grey.

The Rewind offers something just a little different to the average summer festival.

Sauvignon Blanc and a gourmet burger with aubergine relish are standard fare if you are not partial to the marinated lamb or mezze. The assembled gathering of those of ageing years come fully prepared, some degree of comfort being a pre-requisite for a day at the festival, as they sink into those extremely flexible comfortable fold up camping style chairs, occasionally rising to replenish the alcohol or to pull a few moves. The manufacturers even had the good sense to embelish such chairs with a little holder in the arm rest for storing one’s beer, how thoughtful indeed. How very Henley.

Those of a certain age have few inhibitions, after all, many probably do not get out much these days and so why not make the most of it when given the opportunity?  The outfits bore testimony to this day of freedom, as the plethora of Freddie’s rubbed shoulders with those dressed as Kajagoogoo, Virgin air crews, muppets, rubik cubes, bananas in pyjamas and power rangers, it was that sort of afternoon.

Matt Bianco kicked off proceedings with their distinctive brass based, jazzy up beat salsa rhythms and, before anyone could turn around, Aswad were bringing the crowd to their feet with their infectious reggae beat, pleading for the sun to appear, their music shining like a star.

Paul Carrack was next up. The audience probably did not fully appreciate that he was once one of the frontmen for Mike and the Mechanics, Ace and even had a stint with Squeeze, so after the initial “who is this chap?, more wine darling? ” his medley of hits became increasingly well received. How long could he have played? For all of the living years perhaps. He suggested that the audience had another cup of coffee and looked over their shoulders, but all that could be seen was silent running, somewhat like his malfunctioning microphone.

Bands do, by their very nature, change personnel over the years and new amalgamations and reformations add to the variety and tapestry of the occasion. The Orchestra, without any Electric Lights, are the latest incarnation of this popular band which, it could be argued, are more 70’s than 80’s but no one really cared. They bashed out the hits, were sweet talkin’ the women and the sky was blue too, well it just had to be didn’t it? 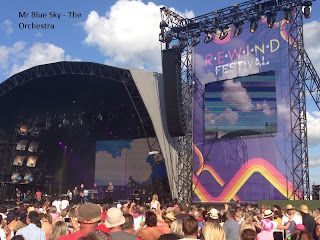 There always has to be a spot of infilling on occasions like this, there are after all only a limited number of 80’s bands willing to put their reputations on the line and the organisers cannot keep wheeling out the same performers year on year. This years ‘three in a row’ sandwich fillers comprised Cutting Crew, whose rendition of ‘I Just Died In Your Arms tonight’ sounded as good as it did when it went global in 1986, but that was about it from them; Sonia, who seemed like a chirpy girl, sang a couple of poppy numbers but alas will not last long in the memory and then Imagination. Hopes were high as their leeed man, Leee John sprinted onto stage but maybe it was just an illusion and memories are playing tricks, as the music lacked real tempo until of course they played the up beat Just An Illusion, which made up for all that went before.

Go West entertained as they always do, as regulars on the Rewind circuit, playing their distinctive brand of 80’s pop. The crowd responded heartily and in good voice to their old classics, closing their eyes and imagining lives as kings of wishful thinking. However, they were arguably upstaged by the following act, Blancmange, debutants in this arena. Their electronic synthpop was a throwback to possibly the overriding theme of the 80’s synthesiser era and their renditions of Don’t Tell Me, Blind Vision and Living On The Ceiling were delicious.

But the 80’s was not just about the electronic, indeed the final three acts illustrated the eclectic mix of music emanating from that era. Firstly, Belinda Carlisle, who once again proved her timeless popularity. The crowd savoured her big hits with the ladies in the audience particularly on their feet belting out Heaven Is A Place On Earth for all their worth, as if they were still in their teens. She was followed by the iconic ABC, suave and sophisticated, suited and booted, as they shot their poison arrows out into the night sky. Martin Fry has lost none of his charm and their performance remains as polished as ever. The Look of Love was, and will probably always be their signature song, and they led nobody down with a rousing rendition to finish their set. And that really was where the evening should have ended, a classic British song, from a classic British band on a classic British evening. 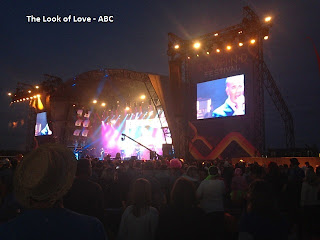 However, it was not to be. ‘The best had been saved to last’ proclaimed the slightly annoying host from one of the commercial radio stations, who was probably not even born in the 80’s. As he read his pre-prepared text,  a group of three ladies in their 60’s made their way onto stage. Now no-one is belittling or decrying The Pointer Sisters, but their brand of disco based American pop spread over almost 40 years does not really compare to the 80’s magic of the likes of ABC. After all, this event is really designed to showcase the 80’s era and whilst The Sisters did their best, told the audience that they were so excited, and concluded with a fine version of their most famous hit, Jump, they were infinitely second best compared to some of what came before. That was disappointing, not only for them but also for most of the 20,000 souls in attendance who, when asked to name an iconic band of the 80’s, would most certainly not have proffered The Pointer Sisters.

With the final chorus of Jump ringing in their ears, the crowd were treated to the customary five minute firework show and as the final Catherine Wheel faded into the night sky, the final curtain was brought down on Rewind 2013.  Faded memories had been re-ignited; songs that the audience once knew off by heart had been replayed and once alluring poster boys and girls had returned to the stage but now as middle aged parents, not the glamorous things they once were. The music is diverse, the audience immerse and it works. That’s entertainment!